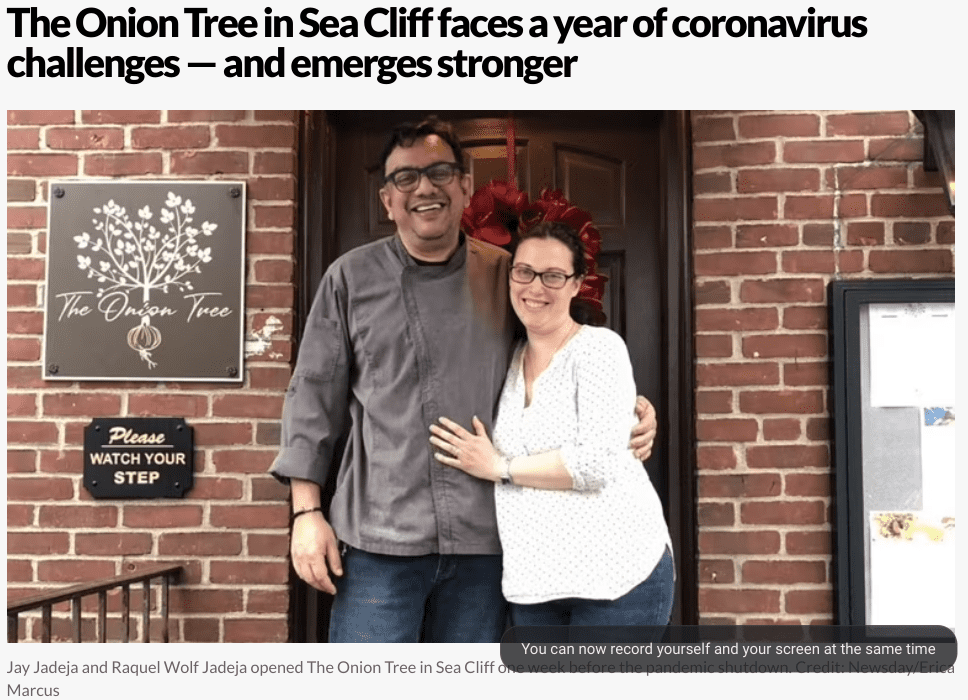 Jay Jadeja and Raquel Wolf Jadeja opened The Onion Tree in Sea Cliff one week before the pandemic shutdown.

"The last time I dined out before the pandemic also marked the last time I hugged anyone outside of my immediate circle. At The Onion Tree in Sea Cliff on March 11, I embraced Raquel Wolf Jadeja, both as a greeting and as a congratulations — the restaurant, which she owns with her husband, Jay, had been open for less than a week.

Talk of COVID was already simmering and, while I ate at the bar (shoulder to shoulder with other guests), I was already second-guessing all of my actions. When I left, I bumped fists with the Jadejas. The next day I stocked up on pasta, beans and frozen vegetables.

Over the next few months, my life changed immeasurably. My two favorite activities, driving around Long Island and eating in restaurants, were replaced by sitting in my apartment and perfecting my fried-rice skills. But my experience was nothing compared to the Jadejas': They launched one restaurant and closed another, while dealing with an onslaught of new challenges.

A year after that first dinner, I returned to The Onion Tree. "Every rug got pulled out from under us," Raquel recalled. "We were forced to pivot again and again. It was, OK, we’ll do family takeout meals; OK, we’ll put tables where the tomato plants were; OK, we’ll install heaters outside; OK, we’ll get tablecloths because the marble tabletops get too cold and we’ll cover the seats with faux shearling."

The Onion Tree opened for business on March 6, 2020, and was instantly busy. The Jadejas were gratified to see a number of customers who remembered them from their tenure at West East Bistro in Hicksville (2013 to 2016) but had not made it to the Wild Side Bistro, the Oakdale restaurant they opened in 2016.

Ten days later, the shutdown brought business to a halt. "No one wanted to go out, let alone go to a new restaurant," Jay said. What few takeout orders they had, bartender Max Sornik delivered but, mostly, Jay said, the two men just sat at the bar, drank wine and watched Netflix (first movie: "Contagion").

"March and April were scary months," he recalled. " We didn’t pay rent for those two months and we’re paying [our landlord] back over the next two years."

Jay’s opening menu had been a refined take on Indian dining, but it turned out to be emphatically unsuited to takeout. He started making his mother’s curries and packaging them, family-style, with rice, roti (whole-wheat flatbread) and papadum wafers — and bought a tiny gas-fired Ooni pizza oven so could sell the pies he’d perfected in Wild Side's wood-burning brick oven.

Things were worse at Wild Side and, when Long Island restaurants reopened for outdoor dining in June, business stayed flat in Oakdale, while it doubled in Sea Cliff. Running two restaurants an hour apart was already straining the couple and their two sons. Now they made the decision to close Wild Side. In February, they moved to Nassau County.

As outdoor dining took hold, Jay doubled down on pizza. Even though it robbed the tiny dining room of 15 seats, he installed an imported Forza Forni oven. "Pizza is a blessing and a curse," he said. "Making it is my favorite thing in the world — I just can’t get away from it, even though it makes it harder to explain what the restaurant is. Pizza and curry? That’s not what I set out to do."

But the pizza helped word get around Nassau’s North Shore, appealed to families with kids and also managed to express the chef’s cross-cultural approach to cooking, with such toppings as chicken tikka masala and Asian-braised brisket with Gorgonzola sharing the menu with Margherita and wild mushroom.

The eclectic menu was better received in Sea Cliff than it had been in Oakdale. "People appreciated the diversity of the menu," he said.

The Village of Sea Cliff stepped up too, closing Sea Cliff Avenue for outdoor dining, first on Fridays and Saturdays but, eventually, from Thursday to Sunday. With 22 seats in the street and another 14 on their own porch and patio, they had as much business as they could handle. And once indoor dining was permitted, they didn’t need all the outdoor space.

Outdoor dining hung on until November; in December sales began to falter and "January was bad. But it started to turn around for Valentine’s Day,'' Raquel said.

The state’s decision to extend closing time from 10 to 11 p.m. meant that The Onion Tree could now count on at least two seatings on busy nights. And Raquel is hopeful that the village will reinstate in-street dining when the weather warms up.

"It’s our one-year anniversary but it feels like years that we’ve had The Onion Tree,'' she said. ''The truth is that we are in a better place now than we were 18 months ago."

Erica Marcus, a passionate but skeptical omnivore, has been reporting and opining on the Long Island food scene since 1998.