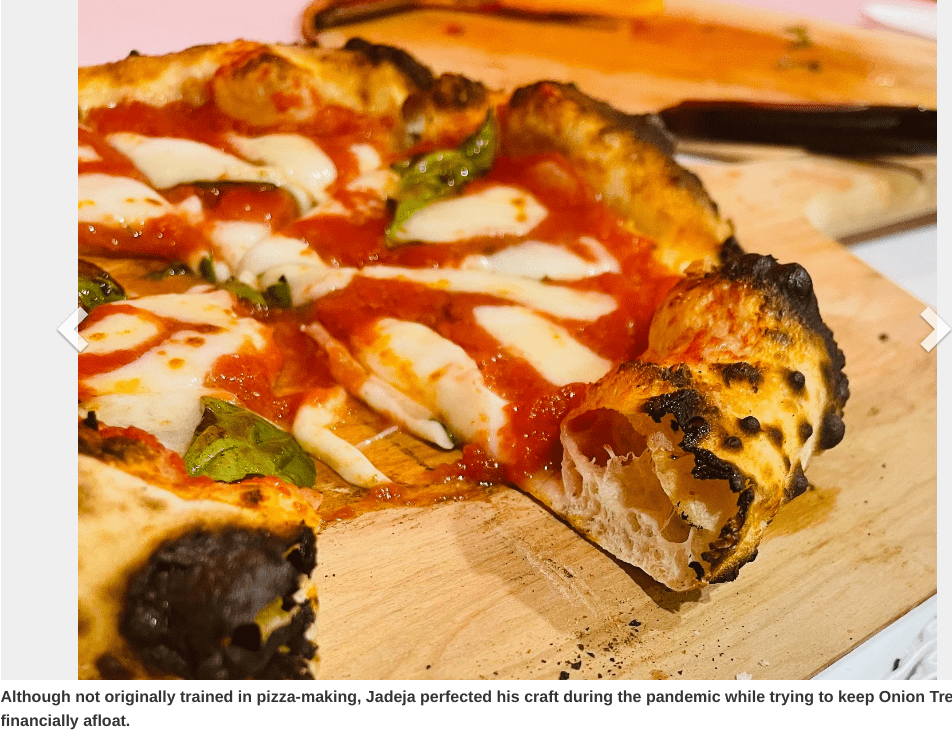 Although not originally trained in pizza-making, Jadeja perfected his craft during the pandemic while trying to keep Onion Tree financially afloat.

Last year Jay Jadeja, co-owner and chef at the Onion Tree, was invited to participate in a pizza cooking competition called the International Pizza Exposition, hosted in Las Vegas, Nevada by the culinary magazine Pizza Today. He competed in the Neapolitan category, but was only able to make it to 75th place, which he considered a disappointment.
But that setback didn’t stop him. A few weeks ago, Jadeja was back at it, competing in the Pizza and Pasta Northeast 2022 Competition in Atlantic City, New Jersey, again in the Neapolitan category. This time, he took first prize, putting himself and the Onion Tree on the pizza-making map, and vindicating his roughly seven years spent mastering cooking pizza.
“It really felt like a validation,” Jadeja said. “It shows I’m learning and getting better, and there’s no boundaries basically being of Indian origin cooking pizza, competing with homegrown Italians who have been doing this for much longer than I have.”
The Onion Tree has been a fixture of the restaurant industry in Sea Cliff for the last two years, attracting customers from near and far with their wide range of dishes and inviting ambience. Several weeks ago, their skill in the kitchen paid off when the restaurant was awarded “Best Neapolitan Pizza” in a competition against pizzaiolos, or pizza chefs, throughout the Northeastern United States. Customers think they are pretty special too.
“My wife and I have tried the pizza, and we love it,” Ed Weinbraun, of Sea Cliff, said. They’d been coming there since the first week the Onion Tree opened. “It’s close to the best anywhere I’ve ever eaten, and I’ve eaten at some pretty good Italian places.”

Jadeja has been cooking since he was 14 years old. His culinary adventures have taken him across numerous countries and dozens of restaurants throughout the world. Jadeja has lived and cooked in England, Switzerland, Australia, Cyprus, Germany, India and the Cayman Islands, and during his travels learned to speak seven languages.
During that time Jadeja learned how to master a wide variety of cooking styles and genres of food. Eventually he and his wife, Raquel Wolf-Jadeja, settled down in New York in 2002, and since then Jadeja has worked at and owned restaurants in Bethpage, Oakdale and Roslyn, among other places.
When Jadeja and his wife Raquel opened their newest venture, the Onion Tree, in February of 2020, they had no idea that a global pandemic was only 10 days away. When they were forced to shut their doors due to the coronavirus pandemic, the restaurant wasn’t financially prepared to lose all their revenue in an indefinite lockdown.
Realizing that it would be hard to convince people to order expensive dishes like steak for delivery from a restaurant that had only been open two weeks before Covid, the couple decided to make pizzas. They got the inspiration from their Oakdale restaurant, Wild Side Bistro, which came with an old pizza oven.
“We were both very against bringing pizza to the Onion Tree at first because our intention with the concept and the space was that it should be more fine dining,” Wolf-Jadeja explained. “So, in the effort to pivot and survive during Covid, it was Jay who came to me and said ‘We have to change the menu. We have to think of more takeout friendly options.’”
The Onion Tree began using the couple’s portable pizza oven, used for catering events and parties, to provide pizza to the hungry residents of Sea Cliff looking to gastronomically spice up the long days of the pandemic. According to the Jadejas, the response was tremendous, and within only a few months they permanently installed a pizza oven at the Onion Tree.