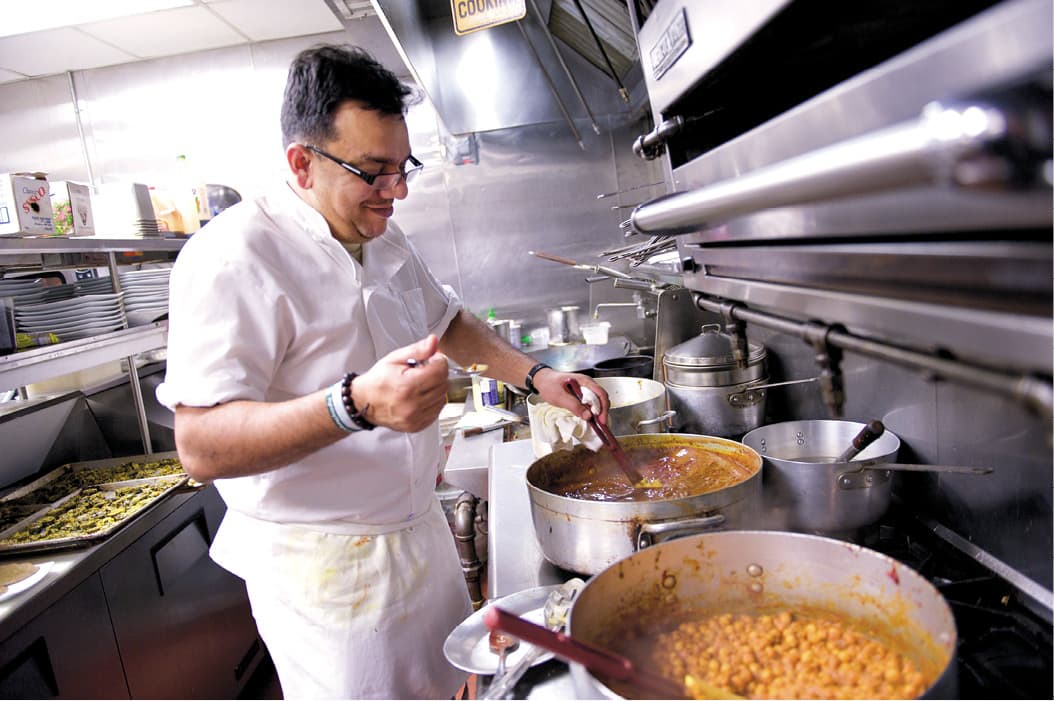 Rajkot to Hicksville, Jay Jadeja keeps it all even-steven.

With two feet planted firmly on the ground in his Hicksville restaurant, West East All Natural Bistro and Wine Bar, Jay Jadeja, at first glance, is every bit Western; he is a happily married suburban father of two precious boys, owns a small business, a mortgage and drives a Toyota Camry.

What sets Jadeja apart from most suburban dads is his rarefied Eastern upbringing. Born Kumar Jitendrasinhji Jayraghurajsinhji Jadeja (Jay, to most) in Rajkot (a former princely state) in the western Indian state of Gujurat to a royal Rajput family, Jadeja was raised in true Rajput tradition, in the lap of old-world Indian luxury. “My grandfather ruled the village where I was born. I can trace my family lineage back to the 1500s,” explains Jadeja, clearly a bit uncomfortable with the disclosure. Educated at the traditionally exclusive Rajkumar College, in Rajkot, Jadeja’s father sensed the young student was becoming a “spoiled brat” and “forced” his son to get a job washing dishes in a local restaurant. “Thank God,” explains Jadeja, “he gave me direction. I don’t know what I would have done otherwise. Be a loafer?”

With an inkling toward working in the food industry, Jadeja left India at age 16 to study at the Alpina School of Hotel Management in Switzerland. What followed was several years of bartending and/or cooking at Swiss ski resorts along with summers spent tending bars in Spain and Italy and driving taxicabs, washing dishes and waiting tables in Melbourne, Australia. Life was certainly full of adventure and fun. Settling down a bit, Jadeja spent a year and a half on the Mediterranean island of Cyprus, attending, and eventually marketing, Tony Robbins’s seminars to European visitors. Perhaps inspired by Robbins’s Awaken the Giant Within, Jadeja began to seriously focus on a career in the food industry, honing his skills with Royal Caribbean cruise lines, initially as a cook aboard the Monarch of the Seas and then as assistant food and beverage manager aboard the Majesty of the Seas. In 2001, Jadeja came to Long Island, working for Harendra Singh of the Singh Hospitality Group, which owns H.R. Singleton’s, the Woodlands, PassionFish, the Water’s Edge, Singleton’s Seafood Shack and Christiano’s, among other Long Island properties. It was during his employ at Singh that Jadeja met his future wife, Raquel Wolf, when she applied for a job. First go-round, Jadeja did not hire the plucky 23-year-old. Her persistence paid off, and the second time around, at the insistence of Mr. Singh, Jadeja hired Raquel. Several years later the now-married (and parents) Jadejas opened their labor of love, West East All Natural Bistro and Wine Bar.

Located in a nondescript strip mall in Hicksville, West East Bistro is far from nondescript. Jay and Raquel have cultivated a harmonious multicultural balance that is reflected in both their menu and decor. Warmly decorated in shades of orange and brown, the tone is set by large portraits, painted by the Jadejas’ personal friend Frank LaTorre, of ordinary people who changed history: Malala Yousafzai, John Lennon, the Reverend Martin Luther King, the Dalai Lama, Mother Theresa and Native American chiefs Last Horse and Sitting Bull. While these portraits are unquestionably impressive and thought provoking, the ambience at West East is decidedly a bit more casual and light-hearted (remember, it is all about balance). Jadeja, the self-proclaimed “Chief Cook and Wino,” is ably assisted by his manager, Tina Arcuri, who refers to Jadeja as her “brother from another mother.” Raquel, a certified holistic health coach, conducts monthly laughter yoga classes at the restaurant on Saturday mornings and is most often seen squiring four-and-a-half-year-old Jonah and seven-month-old Julian in and out of the restaurant. Harmony at West East is palpable.

Family is clearly paramount to the Jadejas, and they truly regard their loyal customers as family. First-name greetings and hugs abound. Their menu also reflects their devotion to their family of customers. The meat that they serve is grassfed, pork and poultry are hormone- and antibiotic-free, their fish and seafood is sustainably sourced, and they only serve organic vegetables and produce. They have also expanded their wine list to include organic and biodynamic wines. This is all built on a basic premise: they simply refuse to serve food to their guests that they are not comfortable serving to their children. This commitment to using the “highest-quality ingredients that are not just good for your health but are good for the planet” has earned West East Bistro a nomination for Slow Food Huntington’s Snail of Approval, “an award given to establishments that contribute to the quality, sustainability and authenticity of food” in our area.

“There is something magical that happens when you bring together people, food and wine,” conveys Jadeja, as he sips a glass of Wölffer Estate Sagaponack Red. The ever-ebullient chef and his team host twice-monthly six-course wine-tasting dinners, which are casually served at a large communal table, encouraging conversation among the guests and staff. In early November, I was invited to a celebration of Diwali, the Indian festival of lights, which also marks the beginning of the Hindu New Year. The traditional Indian vegetarian menu was paired with six nontraditional, but very local Wölffer Estate Vineyard wines. “I love Wölffer wines, and I love Roman Roth, the winemaker,” declares Jadeja. Indian food paired with Long Island wine—just one more example of a life in balance.